"Bro, Bowser better have the best brewskis if he thinks we’ll put up with this" - Hammer Bro

Gang Wars Act 3: Li Transit was a mission created by Mr. Game & Watch. It was one of three missions created for the third act of his Gang Wars arc.

"Dr. Eggman requires an escort on his shipment of spare parts he received from another mad scientist ally. The shipment is vital to the Doctor’s plans, so he will not tolerate failure."

"Bowser plans to intercept the vehicle shipping the parts to Eggman. Help Bowser out and he shall reward you accordingly."

After Dr. Eggman had negotiated his terms with E Gadd, he offered the Gang Leader supplies from Samus’s lab in order to finish Bowser and King K Rool off once and for all. Mr. L and Onaga were tasked to escort the transport heading back to Eggman’s tower.

On the other side of the coin though, Bowser had heard word of the supplies and sent an elite team to raid the transport for its supplies, tasking Krexix to go along with the team.

The team of Hammer Bros hid themselves atop of the roofs of nearby buildings and waited for the transport to come into their sight before raining down a volley of hammers at the two guards below. The tanker took the attack just fine, but the guards took this opportunity to retaliate. Onaga seemed to be a league way above the rest of the fighters since hammers were bouncing off of him like foam darts. He was quickly humbled by a Chain Chomp that exploded from the ground and swallowed the dragon man whole.

Meanwhile, the hammer bros began an attack on the transport due to it being unguarded. Mr. L was quick to remedy that mistake, though having to contend with Krexix at the same time as all of the other things going on were proving to be a bit much without a partner. Metal Knuckles appeared, holding back the Chain Chomp from devouring anything more. While the iron ball was held in place, Mr. L activated the cannon attached to the slow moving transport in order to destroy the beast pursuing them.

In good time, the last of the Hammer Bros and the Chain Chomp were vaporized by the laser beam and the only remaining threat to the transport were Krexix and the Lakitu. The cloud riding turtle attempted to negotiate with the plumber that he mistook for Luigi. Considering that Bowser and Mario had similar ideas for the Life Sphere, it would be a natural alliance. Mr. L revealed that he was not the Luigi he was looking for, and warned him to cease his operation before any more damage could be dealt. He complied and retreated.

Krexix also left the conflict once he realised that their side had lost. Metal Knuckles offered to pursue, but Mr. L told him to stand down since they had already got their transport to its rightful destination.

Dr. Eggman congratulated Mr. L on safely transporting the supplies and gave him his reward and payment.

This thread marked the end of the Gang Wars threads until the eventual finale to it all.

This thread also marks the point where stats and rolling were becoming more commonplace. Some of the combat in the thread involved rolling, but Onaga's actions and inability to take damage was one of the factors that made stats more reliable. 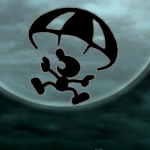