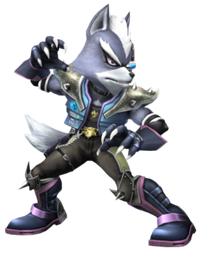 Wolf o' donnel is a character from the Star Fox series, and is the primary antagonist of said series. Wolf is the only known character played by Wolf/Username Luna. He is known mostly as a mercenary, and is the main rival to Fox McCloud and the Star Fox team with his own team, Star Wolf that consists of Wolf O' Donnel, Pigma Dengar [Formerly], Panther Caroso, Leon Powalski and Andrew Oikonny. After the subspace emissary, Wolf attempted to recreate his business in the mercenary world which unfortunately turned to bust after the starvia invaded the world of li. Since then, he's been taking one mission at a time, Being a generally mysterious character in li.

Wolf has shown to posses a more Gritty characteristic in what mission's he's been in with li. Quick to the end goal, and executing his mission flawlessly as possible. Not much for chit-chat in the middle of a important job. He does however posses some kind of politeness in his work, referring to peach by "Miss" in The Greatest Magic Show in Li. He also has some kind of cockiness with himself, making some light jabs along the way.\

Wolf posses the same type of equipment that the star fox crew, Using a small G-diffuser to perform his special attacks, the Wolf Flash, Fire wolf and Reflector. He also posses a special blaster, that fires flaming shots of green energy at his opponent that deal a much greater impact than fox's rapid fire blaster. His fighting style is based mostly around using his claws in rapid succession, making his basic moveset based entirely around clawing.

Wolf's final smash causes him to summon his own Wolfen style Landmaster, using it to trample, blast and other words for absolutely destroy the opponents in his sights. After a few turns, the landmaster changes into the wire frames from whence it came, before leaving and bringing wolf back in the action.

Community content is available under CC-BY-SA unless otherwise noted.
Advertisement